I grew up in and around Philadelphia and love to go back, it’s one of my favorite cities.  A number of years ago during my morning runs, I’d pass this building that has a sign, Historical Society of Pennsylvania.  After a while, I got curious and one afternoon decided to walk in.

There was a geeky looking guy at the front desk and I asked him what was inside.  I couldn’t understand his answer at all.  I’m usually pretty good at understanding what people are telling me, so this was very unusual.   I asked him again, a slightly different way.  He was using terms like primary source documents, and I still couldn’t get any idea what he was talking about , nor what was inside.

After a 3rd failed attempt, I noticed a little sign that said the entry fee was $8 and I thought, What the heck, it’s worth it to find out what’s inside, so to his surprise I gave him $8.

He told me in order to enter I had to surrender my coat and purse to a locked locker and walk inside with absolutely nothing.  Strange.  But I did it.

After walking through a gorgeous lobby, the first room I walked into was a large room

full of small wooden filing cabinets.  That’s all that was in the room.  No people, nothing but small filing cabinets.  I opened one of them and saw it was a card catalog full of hand written file cards like they had in libraries before libraries had computers.  In a library each card represented a book and they were in alphabetical order.  You used it to find the location of any book you were

So I looked through some of the drawers in these cabinets and saw that they were hand written names of people with dates.  Many of them had more than one name.  There was no one in the room to clarify what they were, and besides that, I was done asking questions, so I looked around and saw a sign saying that you were only allowed to request 3 items at a time and to be prepared to wait for 30 minutes while your items were retrieved.  I had no idea what the items were but I thought, What the heck, I paid my money and I’ll request 3 and see what I get.

Since the cards had names of people, I thought I’d look for names of people I knew.  And since this was a historical society, I looked for the name Thomas Jefferson.  Boy did I ever score.  There were a huge number of cards with his name and dates.  I took one of the forms on top of the cabinet, and one of the little tiny pencils that were next to the forms, and wrote down the information from one of the cards. Then I thought I would look for George Washington and found a big card selection with his name and dates.  Third, I looked for Benjamin Franklin and again scored.  I wrote down the info from each of them too.

So, with my little 3-item form filled out, I walked into the next room which was very large and filled with books.  Completely silent.  The silence was almost noisy. 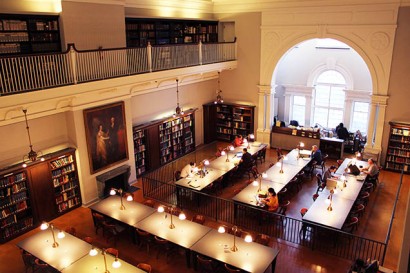 There were only two people very seriously reading and writing by the light of old fashioned lamps in the main room, and one person behind a very large counter.  I took my form to the person behind the counter and asked what I should do next and he said I should sit down and wait for my 3 items while he got them for me.  So I sat and looked around, enjoying the silence, enjoying the room, enjoying the 2 serious people, enjoying this completely unusual atmosphere.

The man showed up after about 20 minutes with a tray and 3 manila folders.  He placed them on the table in front of me.  I opened up one of the folders and found myself looking at an original letter by Thomas Jefferson.  I could not believe it.  I picked it up, held it and examined it, thinking this must be a copy.  It wasn’t.  It was the real deal.  It was old paper.  It was old ink.  It had his signature.  Old, but amazingly in great shape.  The other two folders each contained letters by George Washington and Ben Franklin.

Without thinking, I exclaimed very loudly into the silence, “DAMN!!!!!!  This these are real letters!!!!!”  The other 2 serious people in the room raised their heads and grinned at me.

I read the letter by Thomas Jefferson and started swooning.  There’s something about holding the paper that he had held, seeing the actual ink from his pen, reading his extremely unique handwriting, an experience that made him come completely alive for me.  He was suddenly more a real person than I had ever imagined.

Reading the astonishing brilliance and extreme courtesy in his letter overwhelmed me with joy and a profound wish that he were here today.

Reading George Washington’s flowing handwriting in a letter to his cousin was equally thrilling.  George was writing from a hill in New York where he was looking down into the harbor.  As he was writing, he was actually seeing 400 British ships sailing into the harbor to wage war on his troops.  The sheer number of ships was way more than anyone had ever expected, simply overwhelming compared to the scraggly number of untrained troops George had.  When George saw ships kept coming, saw the outnumbering British, he also saw that direct engagement would lead to quick defeat and he decided on his controversial strategy for the upcoming war.

And in this letter, George was explaining his strategy of not engaging the enemy directly, of avoiding fighting, to his cousin, Lund.  This strategy was hotly contested by Congress which believed it was dishonorable to not fight.  George’s strategy proved ultimately to be the winning one.  But in this letter he’s not writing to Congress, he’s writing to his cousin and it’s a whole different feeling to the letter – he’s miserable and he’s just talking to Lund.  He’s also asking Lund to take care of his home and his family, and you realize what he was sacrificing to be on that hill in New York, doing the unimaginable, leading the rag tag US militia against the greatest military force in the world.

Ben Franklin’s squiggly handwriting was a deliciously charming letter to a friend that had me grinning and wishing he was here now, in Philadelphia, enlivening the city as he always did.

They all three became real men to me.  And my wonder for each of them exploded into boundless.

I spent the entire afternoon there, asking for my next 3 items, then 3 more …. I was in another world.  I emerged with complete faith in humanity, overflowing with admiration for these men, the philosopher, the military strategist, the diplomat who, bold in the pursuit of truth and liberty, shaped the freedoms of our country.  Their ability to communicate, to write, is a power to experience first hand.

Thomas Jefferson left behind 36,000 letters.  Knowing that makes me jubilant.

Since then, every time I go back to Philadelphia I love to spend blissful afternoons there and they just about have to kick me out when it’s closing time.  I float out into the street with faith in the rightness of things restored.

The Historical Society has gotten much more welcoming and definitely better about answering people’s questions over the years.  I learned that primary source documents means documents directly from the person who is the source (original letters) written at that time, not letters published in a book, written later or something written about them.  I learned how to ask for items so they bring me a whole box of Washington’s letters and I don’t have to keep asking for 3 at a time.  The staff have become super helpful there.  So don’t feel intimidated if you ever want to go in.

I now have books of Thomas Jefferson’s generation’s letters overflowing my bookcases at home, so I can read them anytime I want.  But nothing beats holding a real letter in my hands and feeling the mind, the spirit and the energy that went into writing it.  It’s magical.  I still can’t believe I can touch and hold these letters in my hands.  This is the only Historical Society I know of that does that.  The Massachusetts and Virginia Historical Societies thought I was nuts when I asked if I could hold original letters while reading them.  Virginia’s said I couldn’t even see them.  So, it’s a real special privilege in Philadelphia.

Two days ago it was Thomas Jefferson’s birthday.  I want to wish him a very happy one and say Thank you for all the joy your letters have brought me, Tom.  You’ve truly enriched my mind and my life.