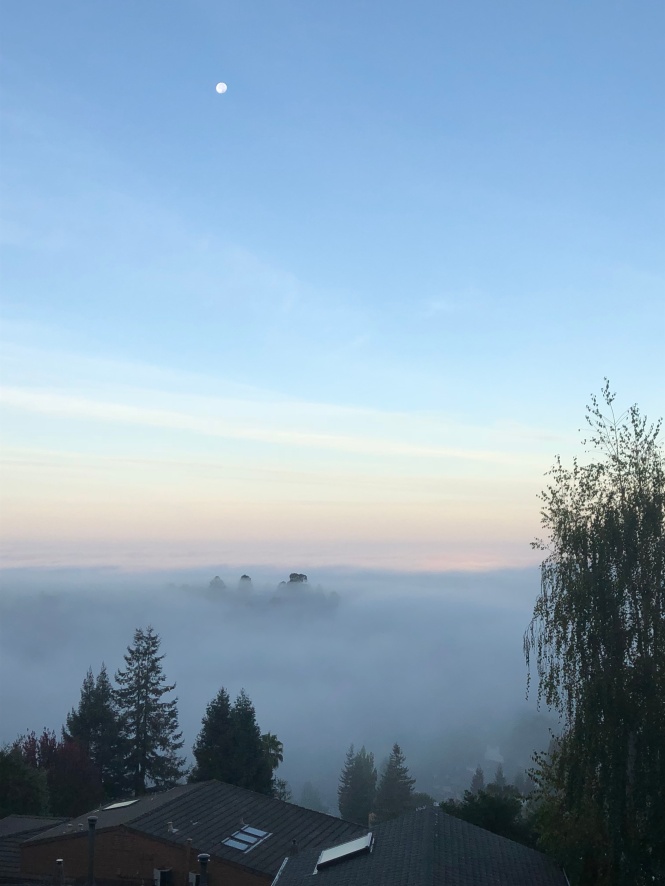 The other morning, on my run, I found myself running above the clouds.  Magic.

First it was night, wide sky dark and starry.  Then dawn’s first light rays penetrate the night. Then gradual pink starts to take over the sky.  Then the magical moment right before pink turns golden.  That’s when the birds started to sing.  That’s when I snapped this photo above.

This magic magnified by the full moon in the sky, showing no sign of leaving, even as the sun rose up in the sky. You can see this magnificent moon in the photo, but the photo doesn’t do justice to the spectacular silver radiance it had this morning.  Somehow it was much larger, closer and way more powerful in real life.

The silver moon was saying, “This sunrise is so glorious, I must stay for all of it. I’m not missing any of this.”

What you see poking through the clouds are the tops of 75-foot pine trees, just to give you an idea of how high up I was.  Even more magic for a girl who lived in the flatlands of Philadelphia and New Jersey for much of her life.  Running above the clouds was not something I ever imagined I would do.

By 11 AM, that fog would’ve completely burned off.  If I was standing in that same spot, instead of at my desk, I would’ve had a clear view of pure blue sky, shimmering water of the San Francisco Bay, the sparkling city of San Francisco and the Golden Gate Bridge.

If I was still standing in that same spot at 7 PM, I would’ve seen the sky go from a butter-scotch golden to a rich rose color as a glorious sunset filled the sky.

That is one magical spot.

Wishing you a sky filled with magic to fill your soul.