Cobblestones aren’t easy to run on, but then again when they put these down in the streets of Philadelphia, nobody back then was jogging.  I’m loving it.  There’s history in these river stones.  If I had walked these same streets 250 years ago, I would’ve passed many of my heroes. 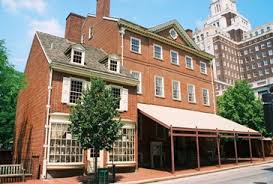 To think I could’ve had a beer at City Tavern, sitting around a table with George Washington, Thomas Jefferson, John Adams, Ben Franklin and James Madison.  I would’ve done whatever it took to be at that table.

They weren’t just drinking and criticizing, they were inventing new rules, creating a new political system, they were architects of a new nation.

One of the things that set a solid foundation for their activism and their writings, both of which thankfully endure, is that they spent endless hours reading philosophy, especially political philosophy, often in ancient Greek, which many of them read fluently.

It’s rather unbelievable to note, especially since Thomas Jefferson was one of the first proponents of public education, that there were no schools when he was growing up. Tutors yes, schools no.   What they all did instead was study, on their own, study consisting mainly of endless reading.  For many years Thomas Jefferson read 14 hours a day, every day.

In America today we don’t study our own American political philosophers, much less the ancients. 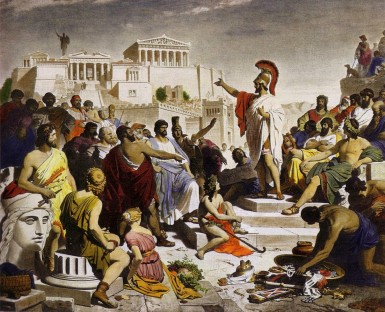 This past year I did a deep dive into the Greeks (source of democracy) and Romans (source of “what can we get away with” political experimentation).  I spent many hours reading Plutarch, Demosthenes, Cicero, Socrates, Seneca, the slave Epictetus and my favorite ancient Greek, Pericles.  Reading their own words, not just reading about them, expanded my understanding of political philosophy down to its roots, understanding the why of it, the why of freedoms, the why of liberty, of human rights.

Their writing is, on the whole, brilliant, moving, profound.  Often I read whole sentences out loud, savoring the vocabulary.  Sometimes I argued, sometimes I hurled the book across the room, sometimes I read the same sentence over and over again. My joy in reading philosophers intent on building something great is inexpressible.  These are conversations worth having.  It’s worth stepping back several thousands of years to directly experience the fruits of their unconventional wisdom.  Often finding wisdom then greater than that found today.

The great women and men of that time built so that what they built was good enough, true enough to endure today.

I only wish I could have joined them at City Tavern and raised a glass.