I have boundless admiration for the man who founded Philadelphia and Pennsylvania almost 100 years before our famous American revolution.

William Penn was a Quaker who allowed himself to be arrested and imprisoned in the Tower of London (I’ve been there – not a fun place) for his religious beliefs.

He most definitely opposed religious intolerance which he believed was illegal, immoral, against nature and a violation of humanity’s ability to reason.   He believed no one had the right to invade another’s conscience when it came to spiritual matters.

In 1681 He received a land-grant from the King of England for the entirety of Pennsylvania (which means “Penn’s Woods”) for annual rent of two beaver skins and 20% of any gold discovered (the King was hopeful, but none ever was, only lots of coal in later years).

Penn created and named the primary city Philadelphia  (from ancient Greek philia which meant love and adelphos which meant brother).  Penn’s meaning for Philadelphia was The City of Brotherly Love.  “Brotherly love” is the feelings of humanity and compassion we have for other humans.  His was to be a city breathing life into this compassion.  First city of its kind with this express purpose.  No second to follow.

And then Penn did something startling that has never been done before or since:  he invited all religions to come live in his new city, to peacefully coexist and live their lives side by side.

This was a CRAZY RADICAL idea back then.  Each colony at that time had its own religion and was utterly intolerant of outsiders.  In Virginia it was illegal to practice any religion but the Anglican Church of England, harsh punishment followed any who disobeyed.  New England had Puritans, famous for persecuting dissenters with uncommon fury, executing them in large numbers by hanging them on the public gallows.   There was no place in the colonies where Catholic Mass was permitted.  I could go on.  It wasn’t just America, religious intolerance knew no borders.

Into this international scene of stubborn intolerance William Penn issued a radical invitation to every religion to come establish itself in his new city where all religions would not only be tolerated, they were eagerly welcomed.   He invited them all to come and enjoy commerce,  common society and most importantly, discourse and dialogue with each other.

He basically said, “Sure we have radically different beliefs.  No doubt we will argue, we will disagree, we will passionately debate, but let’s SEE what happens, let’s see what comes out of it as we do it peacefully and with tolerance.”

He philosophically believed that the brotherly love inherent in all mankind would prevail in these discussions, however heated, and carry everyone through to an amazing outcome.  All that was needed was a place for true tolerance and discourse to happen.  He was profoundly curious what that outcome would be.

He realized no one knew or could predict the outcome of these dialogues because it had never been done.   And because of that, he called it the “Holy Experiment”.   In other words, he said, “LET’S TRY IT!”

Many passionate forward-thinking people of varying faiths took him up on it. 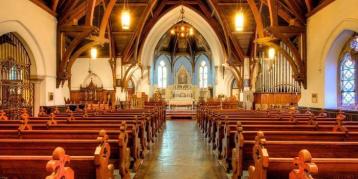 Philadelphia became the first place in the British Empire where Catholic Mass was allowed to be celebrated.  George Washington, John Adams and many others from the Continental Congress, none of them Catholics, attended these Masses at Old St. Mary’s (still there, still beautiful) in the spirit of religious freedom.   John Adams (devout Protestant) wrote to Abigail of the experience:  “The music, consisting of an organ and a choir of singers, went all the afternoon except sermon time, and the assembly chanted most sweetly and exquisitely. Here is everything that can lay hold of eye, ear, and imagination, everywhere which can charm …”  True religious respect.

Philadelphia is the birthplace of the Methodist, German Reformed, Episcopal and African Methodist Episcopal churches in America.  It is here that the first African-American bishop was named, the Hebrew Bible was first translated into English and the first General Assembly of the Presbyterian Church in America was held.

Many religions combined to build this city to be the most attractive, bustling, prosperous and successful of its time, the capital of our nation from 1790 – 1800.  It’s still beautiful today, especially the lovely streets they created that have lost none of their charm or character.

As I run through these streets of old Philadelphia on my morning runs, I am struck by 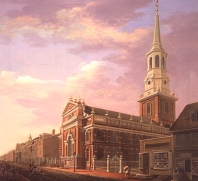 the variety of these old churches still standing on every corner.  Not to mention the Jewish synagogues and historic cemetery, as Jews prospered here and contributed to making the city great.  Talk about close quarters!  In many instances their churches and synagogues were built right across the street from each other!  As one group went to worship, right across the street they could wave to neighbors entering their own church.  Unheard of at that time!

This is a painting of Christ Church, founded in 1695 by a William Penn charter, oldest church in Philadelphia, still standing, still beautiful.

William Penn extended his love and respect for humanity to Pennsylvania’s native American Indians.  He didn’t believe, like other settlers did, that land could just be taken from them. 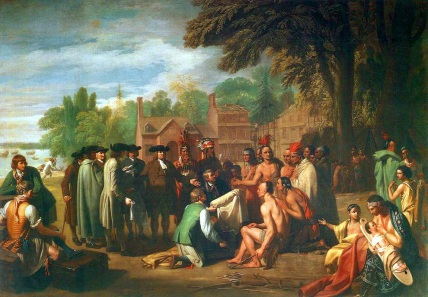 When he first arrived, he wrote eloquently and respectfully to the Lenape Indians, having his words meticulously  translated into their own Lenape language, asking them to live in harmony with him and with the settlers that would come, to live as neighbors.

He attended their Councils, he learned their language in less than a year so he could communicate with them without a translator, he won their trust and negotiated a beautiful peace treaty commemorated in this very old paining.  As a result, the Indians and settlers enjoyed an unparalleled 70 years of unbroken peaceful relations and co-existence.  Completely unprecedented in this country, before or since.

William Penn laid such a strong foundation of guiding principles regarding tolerance and liberty, it is no surprise to me that Philadelphia was the site of the First Continental Congress where revolutionary independence from England was first discussed and debated almost 100 years later, that the beautiful freedom-proclaiming Declaration of Independence was penned here, nor that this is the city where our incredible Constitution and Bill of Rights were born.  The foundation was created not only for a city, but for a nation.

The city of Philadelphia has the richest history, beyond all other cities on this planet, when it comes to consciously and deliberately combining opposing viewpoints, sharply contrasting beliefs with freedom, debate, tolerance and brotherly love, combining all these necessary elements into progressive and effective discourse.  This city has invited free thinkers to do just that from the day of its birth.

Because he believed in the liberty of conscience, brotherly love, and the power of dialogue, because he had faith in the power of REAL communication based on mutual affinity, understanding and respect, William Penn did something no other man or woman has ever done.

Imagine if we had 50 of these men and women today.  What our world would be.

Perhaps you are one?